History of the Naples Sabot

The first Naples Sabot was designed and built by Roy McCullough, who lived in the Naples district of Long Beach, hence the name, Naples Sabot. Roy McCullough and R. A. Violette searched unsuccessfully in Balboa to find a suitable sailing dinghy to buy.   They resorted to building one of their own, and they developed their boat from the Balboa Dinghy and from a design of the MacGregor Sabot which appeared in Rudder Magazine. The main change which they affected was to substitute a leeboard for the centerboard in order to more easily launch the dinghy on top of Mr. McCullough’s large yacht for trips to Catalina.  The leeboard also provided a method of bringing the board out of the water in order to sail across the mud in Alamitos Bay which was not dredged at that time.  The first two Sabots were built in Mr. Violette's garage. Number One Naples Sabot, which was painted blue to match Roy McCullough’s yacht, was built for the son of Roy McCullough, Bill McCullough who sailed the sabot as a child in Catalina.  Number Two Naples Sabot was built for R. A. Violette and painted red.  These sabots were built during the war when wood, nails, and all other materials were not readily available. As eight-foot plywood was difficult to obtain, shorter pieces had to be spliced together for the planking, and the two men were able to obtain some plywood from McDonnell-Douglas. All the fittings had to be designed and specially made, and the sails were cut from the spinnaker of a large yacht. 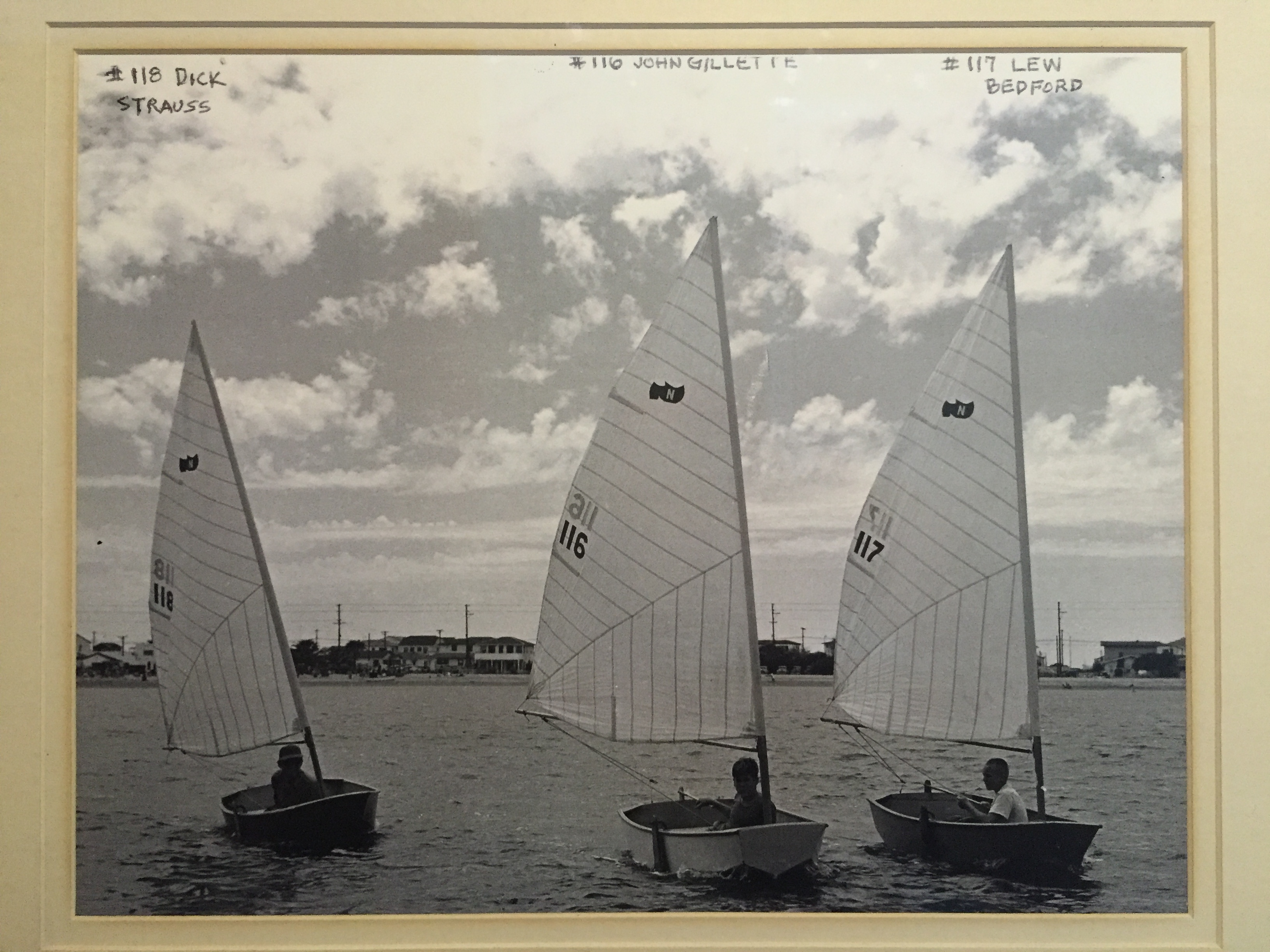 Many Naples Sabots were used as tenders for larger yachts. Racing was restricted to Alamitos Bay until the end of the war. At that time, people who saw the sailing performance of the Sabot became interested, and the class began to grow. Official plans were drawn by L.M. Dingler in 1946 (revised in 1949), and others began to build Sabots including W.L. Campbell, Harry Davis, and Willis Boyd. More and more boats were built, some by professional builders and some by hobbyists in their own garages. Juniors and seniors were enthusiastic about these sabots, and the Naples Sabot became the Number one dinghy for teaching beginners to sail. Soon the children became 'pros' and due to their light weight and increasing skill began to regularly outsail the adults. The oldsters became discouraged and quit, but not for long. This sporty little boat was too attractive. For some time the children were required to carry weights, but even with this handicap, the youngsters often won. Eventually the weights were given up for safety reasons. The class was merely divided into two groups, children and adults. Today we have A, B, C, and even C2 and C3 fleets of children, plus sabotiers (adults), masters (adults over 40) and grand masters (over 65). 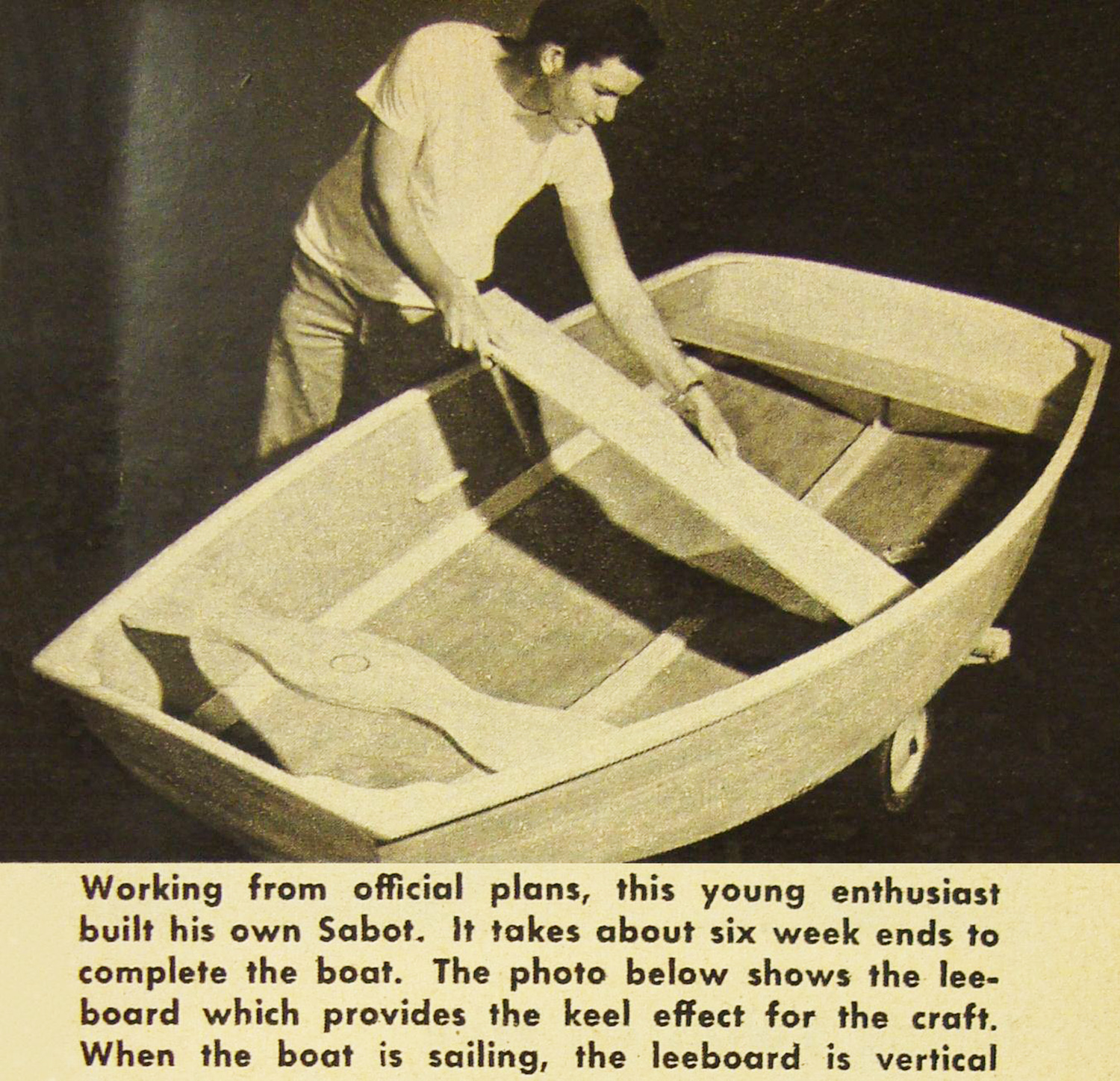 The Midwinter Regatta of 1946 saw the Naples Sabots out of home waters for the first time.   Enthusiasm really took hold in the summer of that year when there were at least 20 boats in every race. By this time racing skippers in the class ranged in age from 10 to 50. (Today the range in age is even greater.) Interest continued into the winter with about 10 boats attending the Christmas Regatta at Newport Harbor Yacht Club. The Sabots made the greatest showing of any class at the Manning Series at Newport in January of 1947 when 29 Sabots competed, though there were less than 100 Sabots in existence at that time. 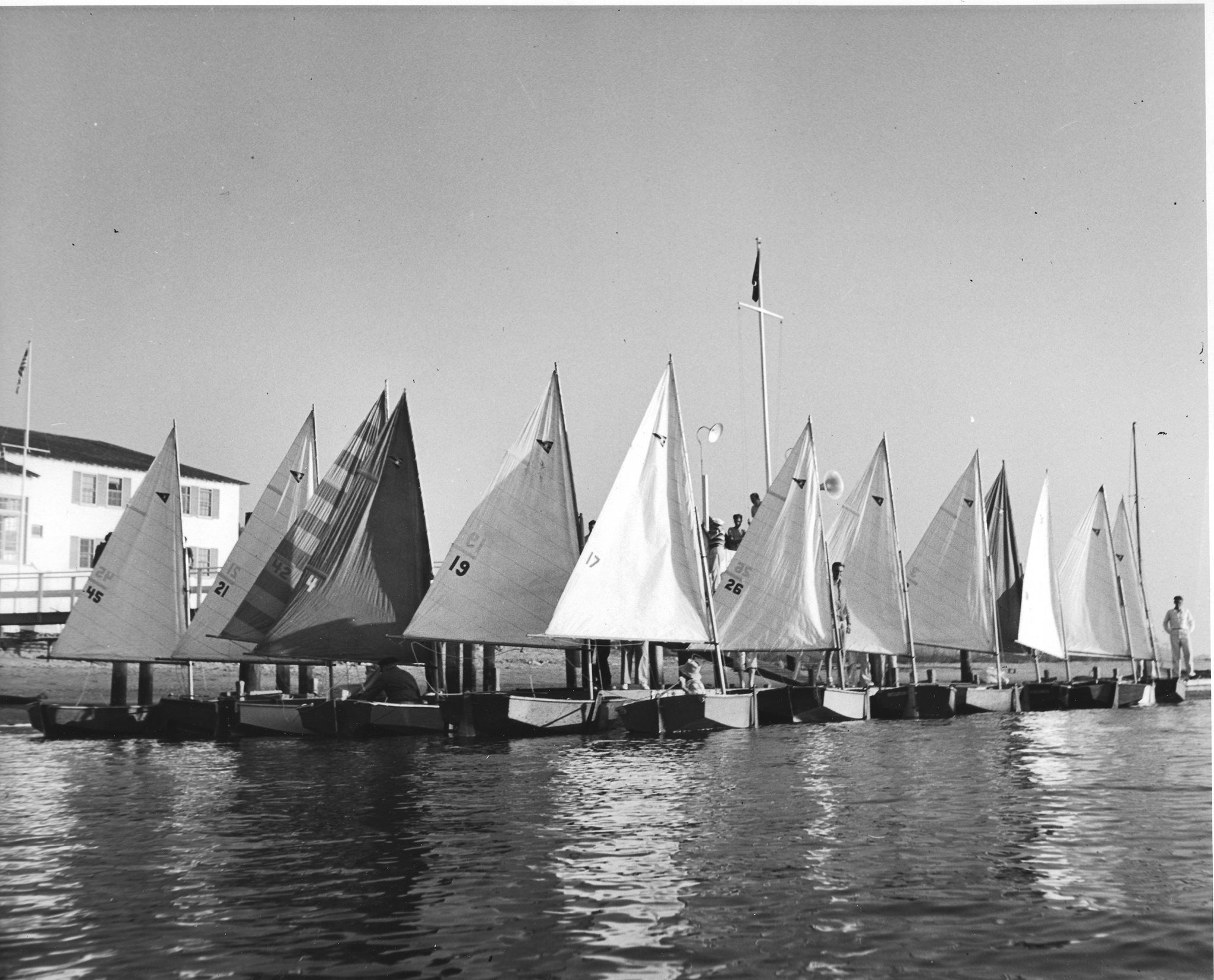 Midwinters in 1947 were sailed at Alamitos Bay, and there were also match races and intercollegiate races during the late winter and early spring. The summer regattas began with Memorial Day at Alamitos Bay and continued through the Summer Series. The 1947 tour of regattas started with the trip to the S.C.Y.A. Championships in Santa Barbara in which 11 Sabots competed. All 11 raced out to an ocean marker and back without trouble. The next events were the Lido Isle Yacht Club Regatta, followed by Race Week and Newport Harbor. The week following found the Sabot racing 10 races in 5 consecutive days while participating in the Fiesta Regatta and the Labor Day Regatta at Alamitos Bay.

Some of the early enthusiasm was inspired by the raffle of Naples Sabot No. 100 at an Alamitos Bay Yacht Club Annual Meeting. The boat was won by George Hart Jr. Another Sabot, No. 105, was raffled at the Santa Barbara Yacht Club to increase interest in the class there.

Beginning in 1948, two annual regattas were sponsored by the Naples Sabot One-Design Association: the Round Robin Regatta in May and a Championship Race in August. For these the Association donated perpetual trophies. Also in 1948, there was a growing interest in the Naples Sabot in Malibu. They wrote, phoned, and sent representatives to Alamitos Bay to get a class started there. By October 1948, there were 12 boats finished and sailing at Malibu and arrangements made to build 8 more. There they launched them through the surf and sailed in the ocean.

At the same time interest was growing also in the Mission Bay-San Diego area, where boats were being built by the Dash Manufacturing Company as well as private individuals. With four completed Sabots and others under construction, Mission Bay applied for and received a Fleet Charter on October 29, 1948, becoming the second fleet of Naples Sabots. Early officers of the Mission Bay group included John Gillette, Ethel Daschner, and Richard Strauss. Malibu also received a charter at that time and became the third fleet. Officials in the Malibu Fleet included John Biby, Howard Splane, Allan Storms, Dudley Murphy, and Michael Perriere.  Growth in the class was indicated by the 66 new Sabots which were built in 1948:  44 at Alamitos Bay, 10 at Mission Bay, and 12 at Malibu. That year the Naples Sabot skippers enjoyed many regattas at Alamitos Bay, Balboa, Glorietta Bay, Los Angeles Harbor, Malibu, Mission Bay, Newport Harbor and Santa Barbara. Invitational regattas, as well as their own class-sponsored races, the Round Robin and the Championship Regatta, were well attended by Sabot skippers.

In May 1949, a four-page illustrated article in Popular Mechanics Magazine made the Naples Sabot internationally famous. Popular Mechanics is printed in many foreign languages, and within a year the secretary of the Naples Sabot One-Design Association had become an international correspondent. Requests for plans and information on how to form fleets came in many languages from all over the world. Requests also came from all over the United States, wherever there was a bay, lake or body of water accessible. By August 1949, we had received approximately 175 letters, sold 90 sets of plans to 25 states, Alaska, Honolulu, Canal Zone, and to other countries including Belgium, Canada, Denmark, Holland, Mexico, and Spain. More states and countries have been added to this list over the years, and even today we receive occasional inquiries about the Naples Sabot from other states and countries, resulting from that article. 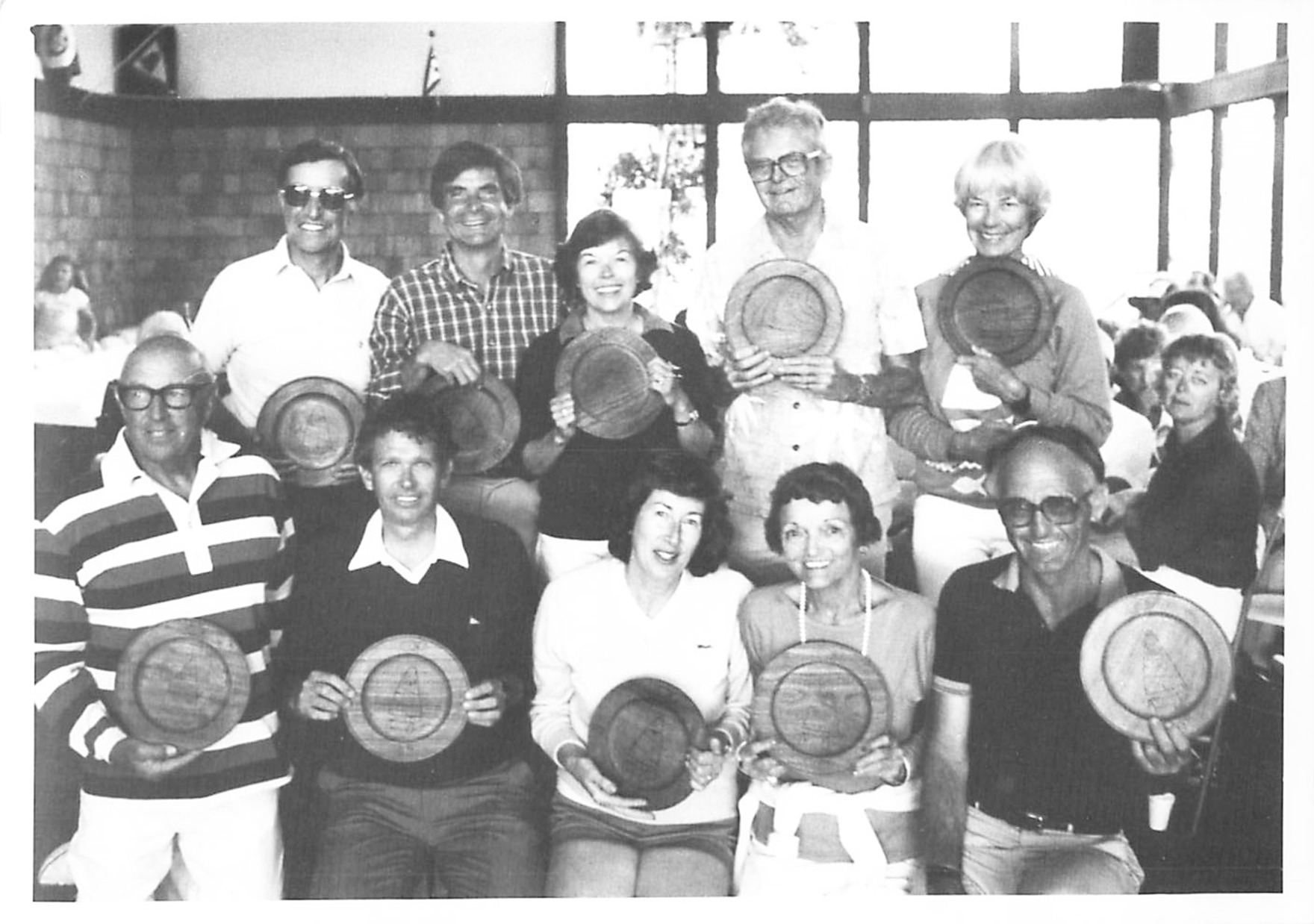 The Naples Sabot continues to grow in numbers and popularity. The success of its racing history can be further traced by scanning through the yearbooks that have been published almost every year since 1965. Individually there are too many events and facts to incorporate in this history. However, collectively, the articles written in yearbooks and newsletters are a printed tribute to a fine racing dinghy. The Sabot has been used in intercollegiate racing, match racing, team racing, handicap racing, and many other forms of competition. 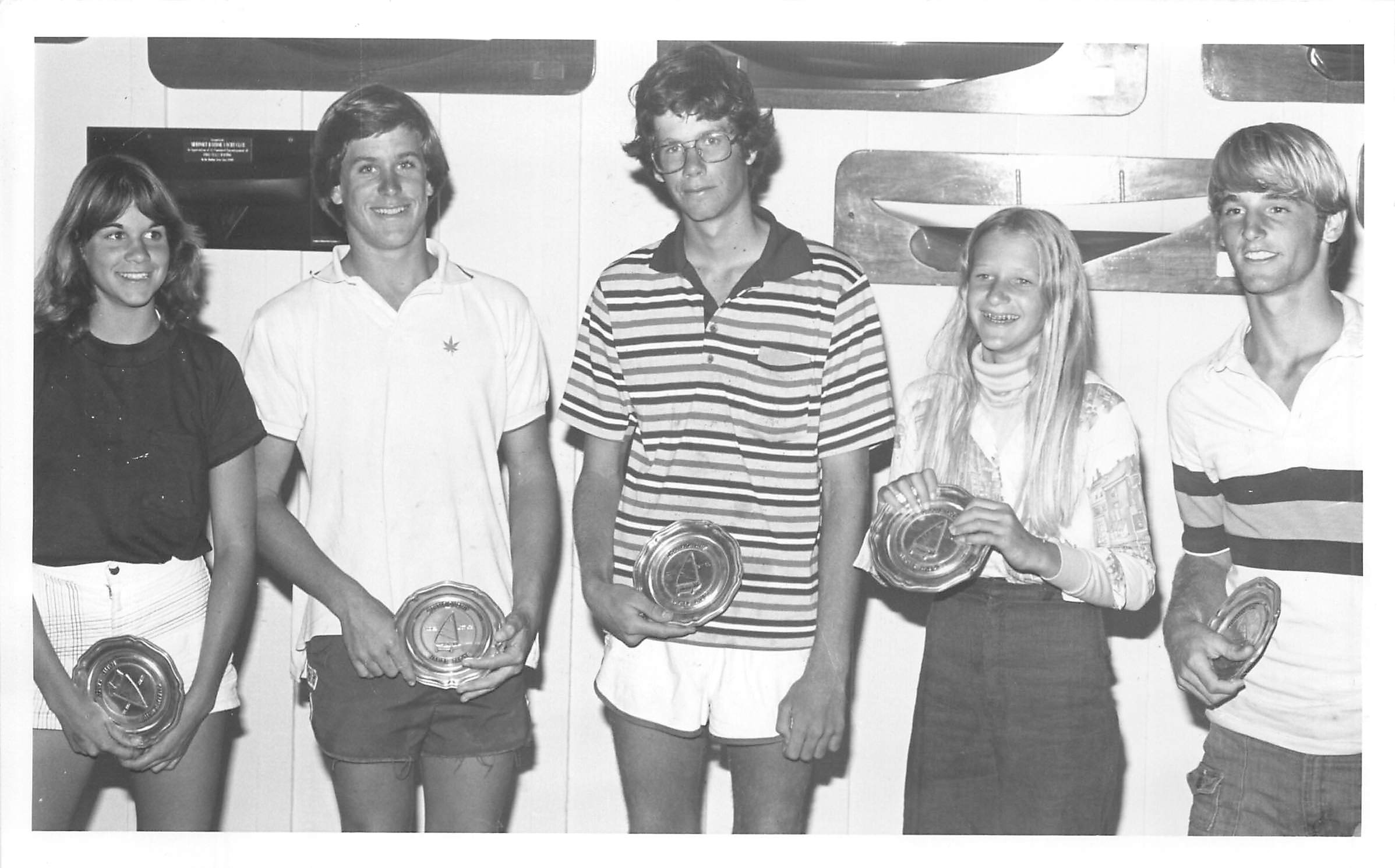 Although many innovations have been incorporated to improve efficiency and keep the boat up to date, the Sabot has remained a one-design racing yacht. It has survived for many years and appears to be headed for many more as a dinghy for competitive skippers of all ages.